7 Things I Learned About Cooking from Watching Charmed 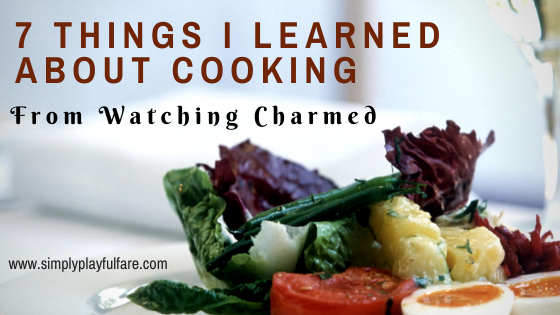 So I bet you’re asking what does a fictional TV show have to do with cooking?

Quite a lot, actually.

You need skill, confidence, a good plan, the ability to think on your feet when things aren’t going your way, and a little bit of love.

In 1998, if you weren’t watching Charmed, you weren’t cool.  It was Aaron Spelling’s new hip show about three magical sisters who fought demons, monsters, and evil.  They saved the world while somehow maintaining semi-normal lives.  There was fashion, cool music, suspense, and magic.

In “She’s a Man, Baby, a Man!”, an evil seductress is killing men in San Francisco.  The sisters formulate a plan to use Prue as bait.  They cast a spell, and Prue is turned into a man.  The seductress seeks Prue out, and the sisters destroy her.

When you’re fighting evil, it’s imperative to have a plan. The same thing is true when you’re cooking.  A recipe is nothing more than a well-mapped out plan.  Even if you’re not starting out with a recipe, you need to plan out how you’re going to make your dish.

What ingredients will you use?  Are your flavors compatible?  For instance, dairy curdles when paired with acidic foods.

What cooking method are you using?  Do you plan to grill, sauté, or are you going to throw everything in a casserole dish?

If you don’t formulate your plan your dish may not turn out.

2. …But Sometimes That Plan Doesn’t Work Out

In “All Halliwell’s Eve”, the sisters are sent back in time to the Colonial Era to stop a demon from wiping out their entire line.  They are sent without any knowledge of why, and they are forced to figure it out as they go.  Unfortunately, their powers do not work, since technically they haven’t been born yet. They need a Plan B.  They learn how to channel magic through nature and stop the demon.

Just like the sister’s plan, sometimes your best efforts don’t work out the way you planned.  Have you ever started a recipe to find out that you don’t have what you need or realized you forgot something you needed at the store?  You don’t have time to go back, because you need to get dinner on the table now.

You’ve got to be able to think on your feet.  It helps to know how to substitute things you have for what you don’t have.

If you’re out of pasta, rice can be a good replacement.  When substituting vegetables, think about similar textures, such peppers and onions.

Dried herbs are stronger than fresh herbs.  If you add too much, you’ll end up overpowering your dish.  You can usually get away with substituting water for other liquids, unless acid is needed for a chemical reaction in what you’re cooking.  This substitution guide is a great resource.

3. There Will Be Consequences Unless Recipes are Followed Exactly

In “Cheaper by the Coven”, the sister’s Grandmother casts a spell to put an end to the sibling rivalry between Piper’s sons, Wyatt and Chris.  The spell backfires, and the sisters are turned into teenagers again.  When a demon attacks, they run in fear, leaving the children vulnerable.  Grams summons the sister’s mom, Patty, to reverse the spell.

Grams may have avoided the consequences if she would have thought through her spell completely before casting it.  Read through your recipe fully before you start cooking to make sure you understand all directions and have all the ingredients you need.

Recipes need to be followed exactly, or they won’t turn out like they’re supposed to.  The substitutions above are the exception.  Just don’t go off grid unless you know what you’re doing, or you may have a disaster.

For example, when you’re making pie dough, you need to know that Coconut flour absorbs liquid, so it’s not a good substitution.  Also, it’s difficult to substitute butter, because the fat is what creates the flaky texture by adding “fat pockets” to dough.

4. You need to Believe in Your Abilities

In “Happily Ever After”, the evil queen escapes the mirror she’s been trapped in for years.  She wants to be the most powerful witch of all, so she kills the guardian of the fairy tales and seeks to destroy the Charmed Ones.

Piper summons Grams to help her get ready for the birth of her son.  Instead of helping, Grams criticizes Piper, and Piper is left doubting her abilities as a witch.

Phoebe is transformed into Cinderella, and Paige eats a poisoned apple and falls into a deep sleep.  Piper is eaten by the Big Bad Wolf.

Piper blows the wolf up from the inside, and she realizes that she is a powerful witch.  She doesn’t need Grams after-all, and she takes on the evil queen all by herself.

If you don’t have confidence in what you’re doing, you’ll second guess yourself, which means you’re more likely to make a mistake.  Mistakes are not all bad, as you’ll see below, but careless or stupid mistakes only waste your time and money.

Have confidence – you got this.

5. To Grow, You need to Try Things You’ve Never Done Before

The sisters tried new things with their powers all the time.  Piper froze the dark priestess and then unfroze her head while the rest of her body was still frozen.  They tweaked spells to fit situations, not knowing if they would turn out.

The Charmed Ones pushed themselves to try new things, growing in the process.

You need to push yourself to become a better cook.  Try new recipes to stretch your skills.  The more you practice, the better you’ll get.

Choose a recipe that challenges you.  Attempt a soufflé.  If it flops, figure out what went wrong and try again.  Try Julia Child’s Boeuf Bourguignon.

Have you always wanted to make croissants from scratch?  Go for it!

If it doesn’t work on the first try, eventually, you will succeed.

6. Family is the Most Important Thing

In the episode “Power Outage,” a powerful demon tries to break the sister’s bond by invoking the help of Andras, a demon of rage.  He infects them with rage, and they turn on each other.  The power of 3 is broken.  The sisters eventually reconcile, regain the power of 3, and vanquish Andras.

The powerful demon tries to destroy the one thing that is the most important to the Charmed Ones: their sisterly bond, which is why he fails.

One of the best parts of cooking is sharing your food with friends and family.  Food brings everyone together, nourishes the body with nutrients, and nourishes the spirit with joy.  If you keep your loved ones in mind when you cook, you’ll create some spectacular dishes to share, along with lifetime memories.

7. Your Mistakes can Teach You Important Messages

In “Pardon my Past”, Phoebe’s past life literally attacks her.  She was in love with an evil warlock named Anton and she turned evil.  Prue and Piper put a curse on future Phoebe, and she will die in this life if they can’t find a way to save her.

They vanquish Anton and use a magical amulet to save Phoebe.  Phoebe struggles with the fact that she was once evil.  She realizes that she has learned from her mistakes, and that’s what is important.

Just like Phoebe, we can all learn from our mistakes.  Making mistakes is an important part of learning any skill, because it’s the fastest way to learn.

If you burn a chicken breast because the temperature on the pan was too hot, you’ll remember to cook it on a lower temperature next time.  Did you forget to add the sugar in a muffin recipe?  I bet you’ll check the recipe next time to make sure you’ve added everything.

Don’t dwell on your mistakes.  Let them teach you how to be a better cook.

Putting it All Together

You need to have a plan, but you’ve got to be flexible when things don’t go as planned.  To avoid flops, pay close attention to the recipe you’re following.

Learn from your mistakes, believe in your skills, and push yourself to be better. And always remember why you’re cooking in the first place.

If you liked this post, please show the love and share it on social media.  Feel free to continue the conversation in the comments below.