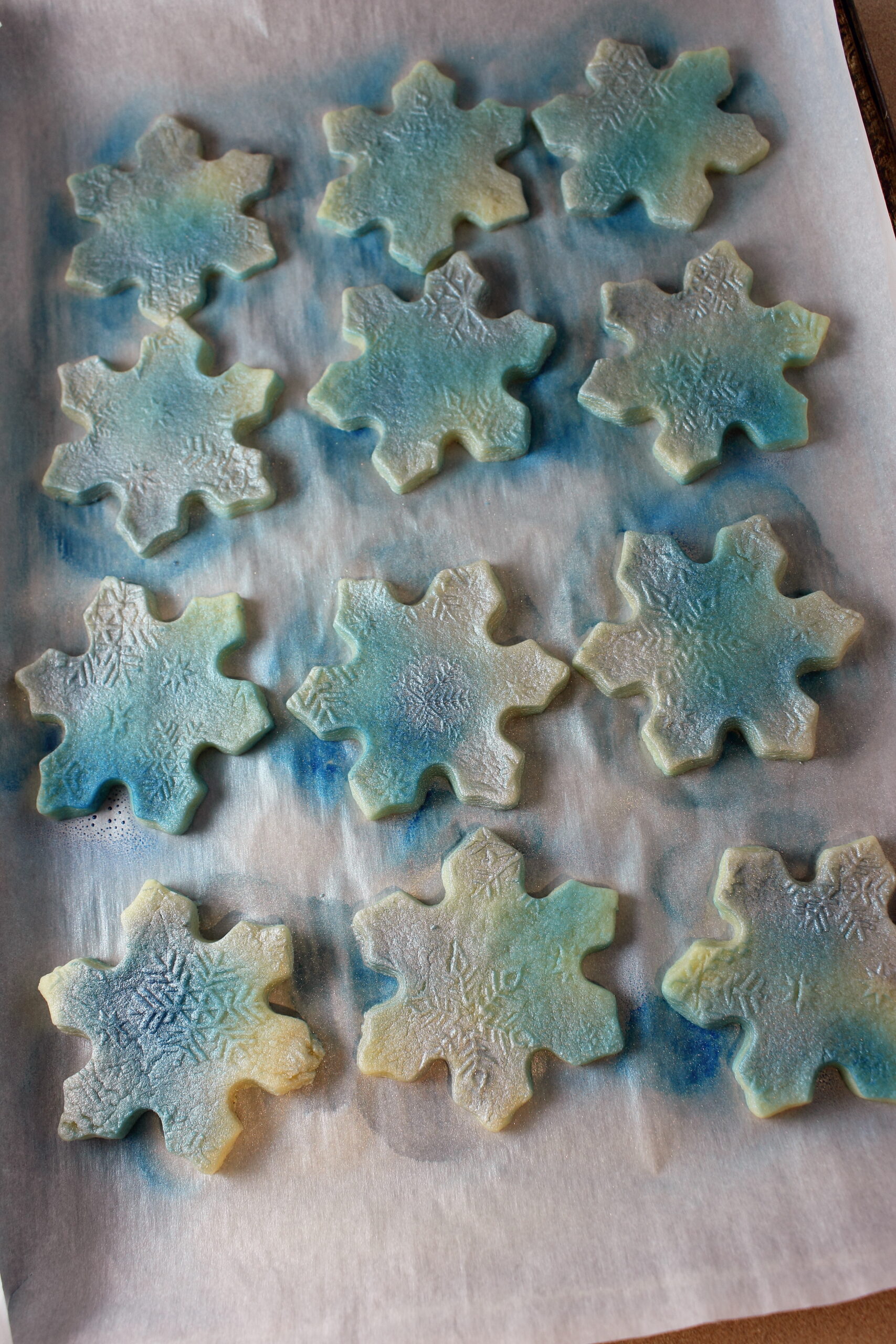 The Story Behind Disney’s Frozen

The original Snow Queen was written by Hans Christian Anderson, and had a very different ending compared to Disney’s Frozen.

Anderson writes a seven part story about two children who are friends and playmates.  Kay, the boy, is basically kidnapped by the snow queen because he hitches a ride on her sleigh and is taken through the snow and ice away from his home.

He stays with her because an evil troll created a mirror that makes ugly things seem ok, and a piece of that mirror got into his eye when it fell from the sky and broke.  It’s so small that it doesn’t hurt his he.

Gerda, the girl, goes on a journey to find Kay, and is distracted by many things including a good witch who only wants to keep Gerda for herself.

In the seventh story, the Snow Queen has kissed Kay so much that she has almost frozen him to death.  Her palace is cold and melancholoy.

The Snow Queen leaves to go to the warm lands, and that’s when Gerda walks into the palace to find Kay.  Gerda’s hot tears of joy thaw Kay, and he comes back to life.

Kay cries so much upon seeing Gerda, that the piece of the evil mirror is washed out of his eye.

And they live happily ever after.

There are a few affiliate links in this post, which means that I’ll get a small commission if you click on the link and buy the product.  But I love and use all the products I promote.

Also, I was given a free embossed rolling pin from Embossed Co. in exchange for a review of their rolling pin.  It’s a fun concept, and I was really excited to use the snowflake pin for my Christmas cookies.

To be honest, I was a bit disappointed.  I had to press the rolling pin into the dough pretty hard to get the shapes to show up, and they still kind of baked out.  You can see the snowflakes in the pictures, and the impressions aren’t as sharp as I was hoping.

I even tried the pin again and made sure to chill the dough before I rolled it out to see if that made a difference.  It made a small difference.

What I do like about their company is that they give back to the community by donating %15 percent of their profits to several non-profit organizations to support malnourished families in developing countries.

I used a basic sugar cookie recipe.  You can use your favorite recipe, just make sure it’s a roll-out.  Follow the recipe and make the dough.

1.  Choose your food coloring.  We used Wilton’s Performance Color System, which is really easy to use.  It’s less messy than their gel colors. 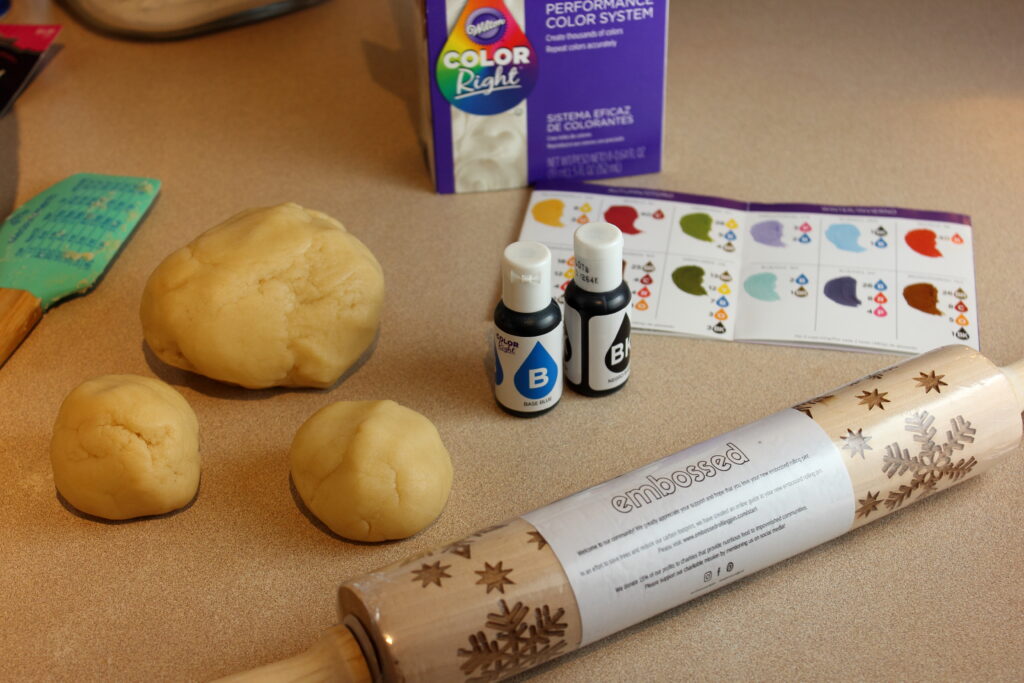 2.  Separate your dough into three pieces. 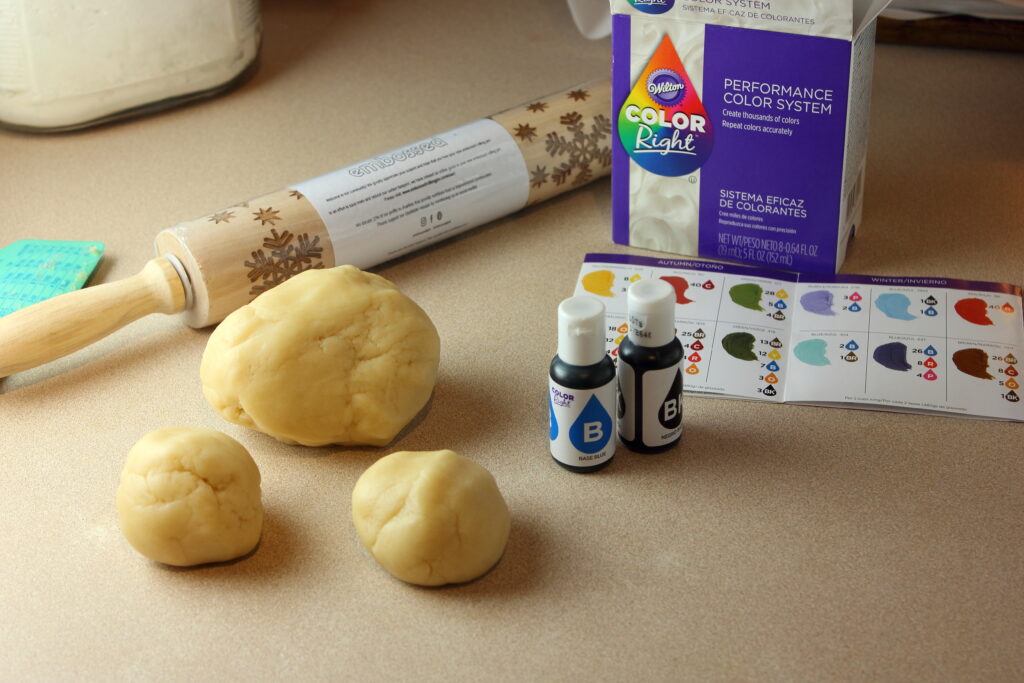 3.  Add the food coloring to two of the pieces of dough and mix the color in until it’s well distributed. Just make sure to use the directions to get the color you want.  Don’t color the third dough ball – just set it aside. 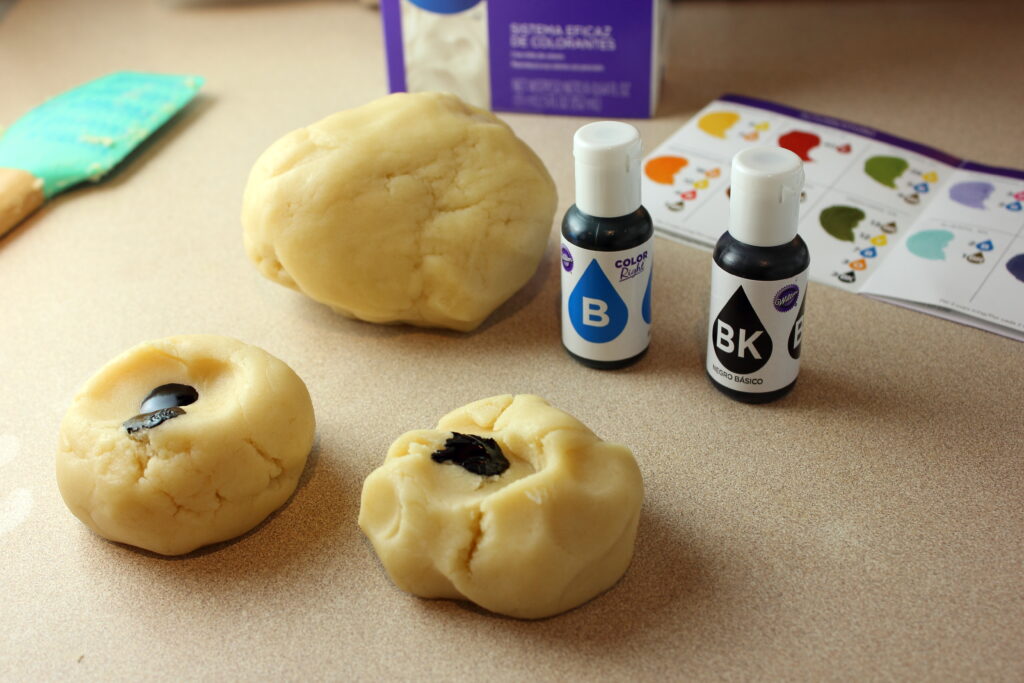 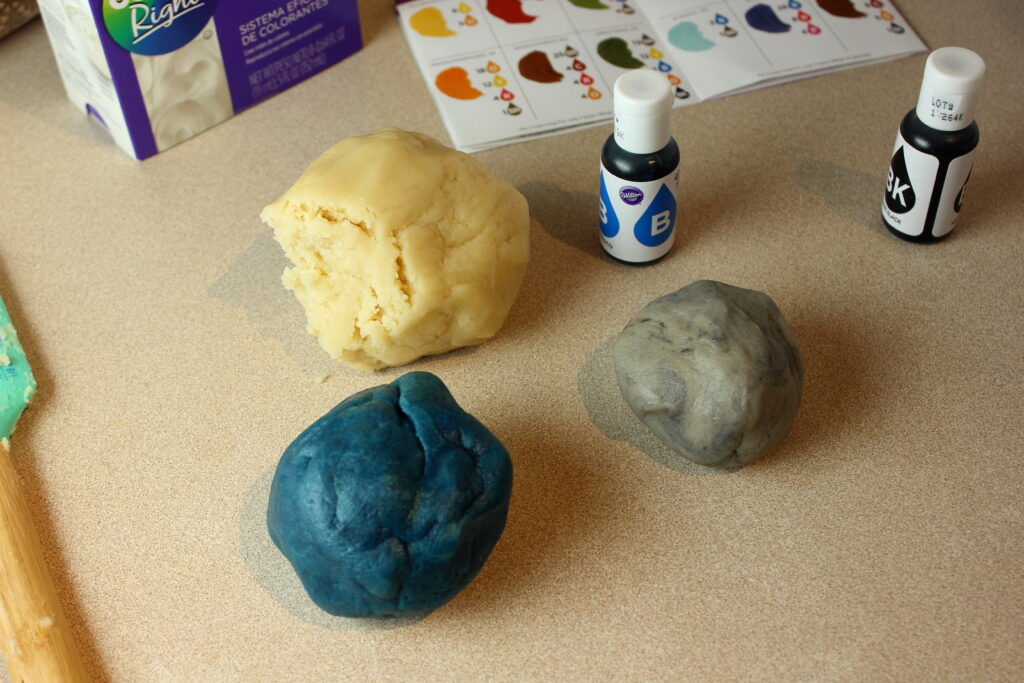 4.  Take pieces of the colored dough and put them in random spots on the third uncolored ball. 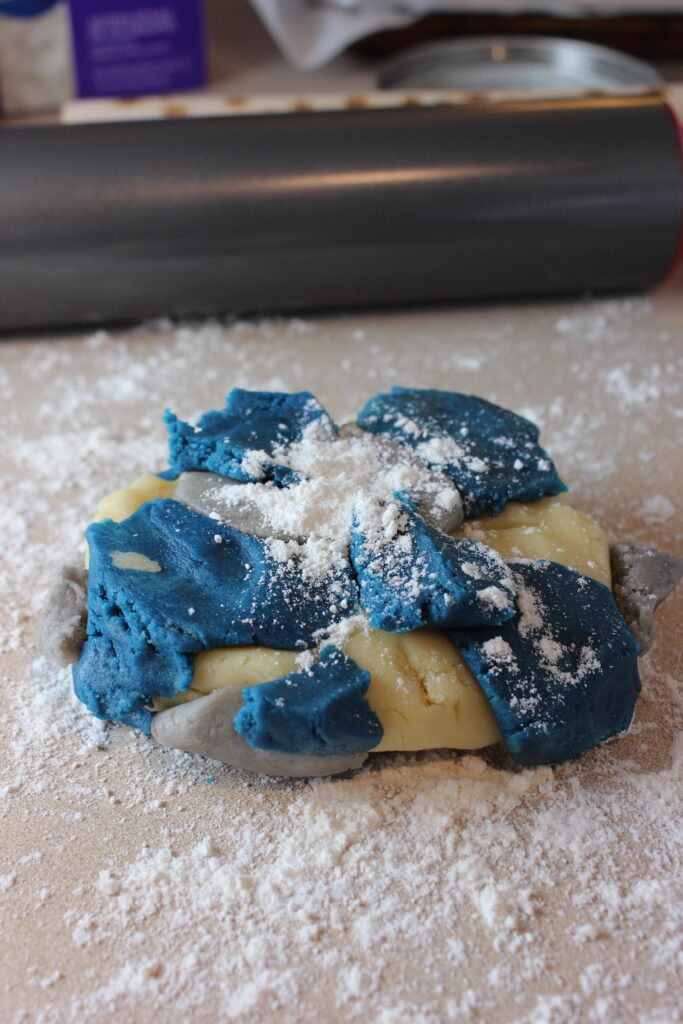 5.  Using your rolling pin, roll out the dough, and then fold it on top of itself again and roll out.  This is what creates the marbling effect, but be careful to only do this a few times, otherwise the dough will become one color instead of marbling. 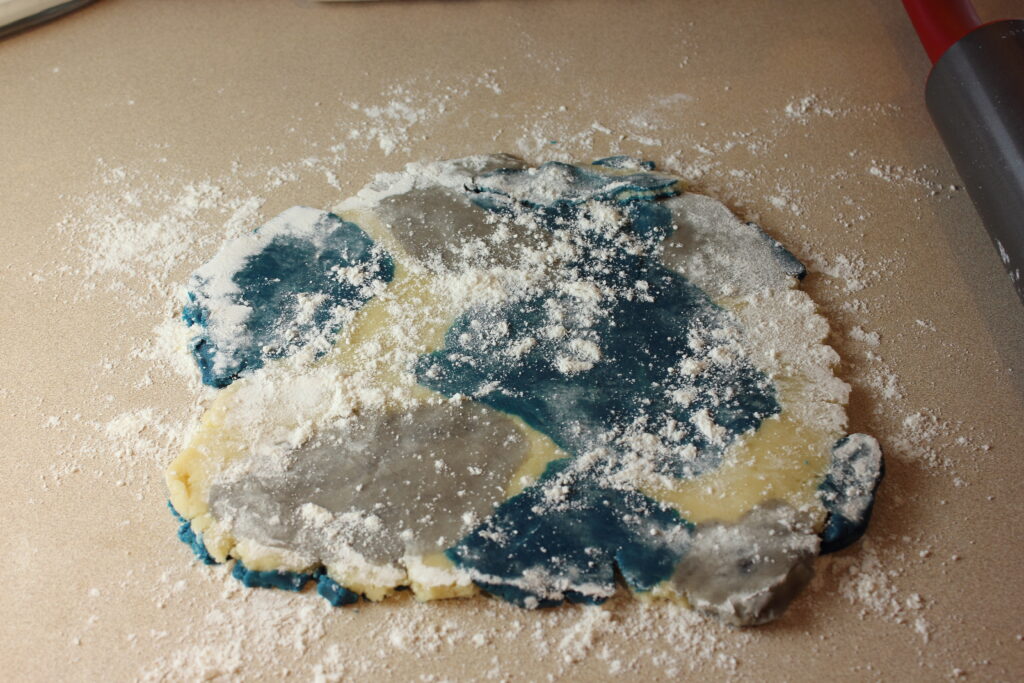 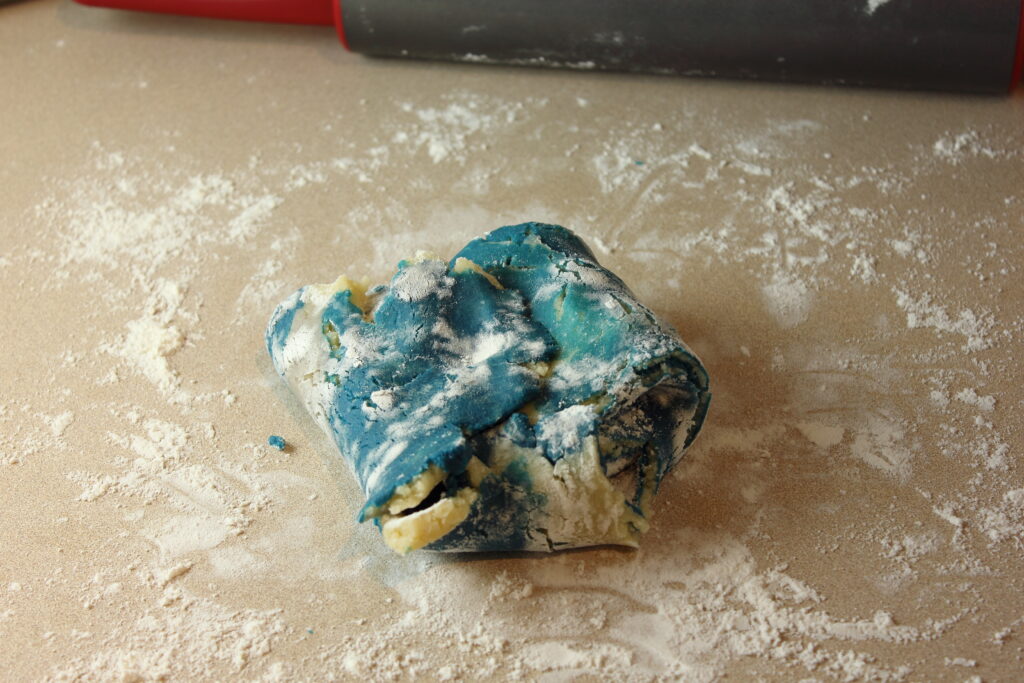 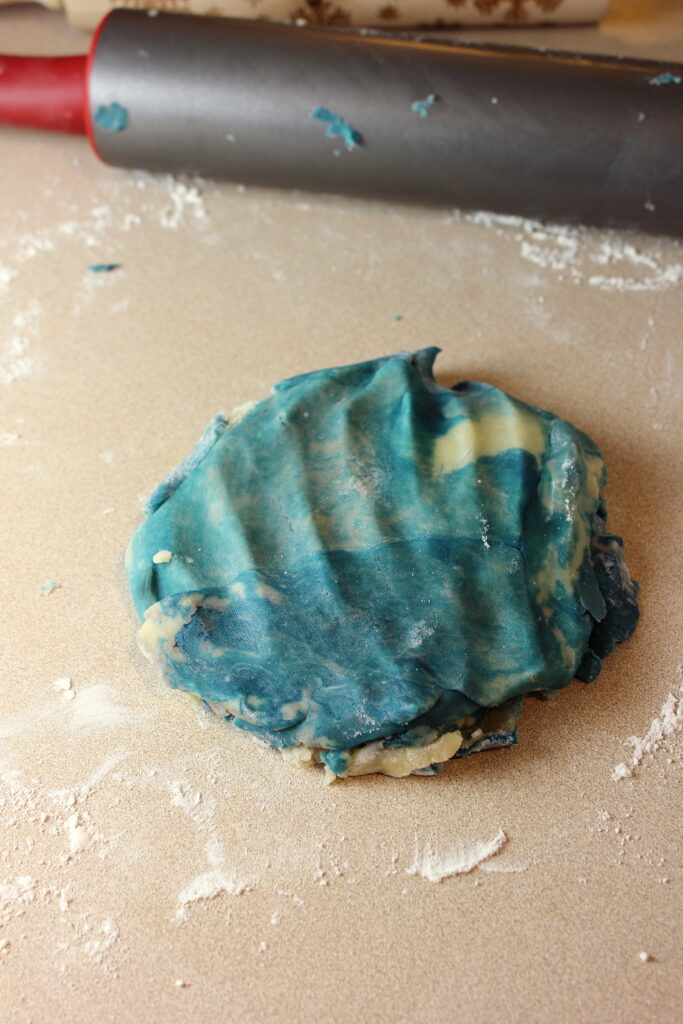 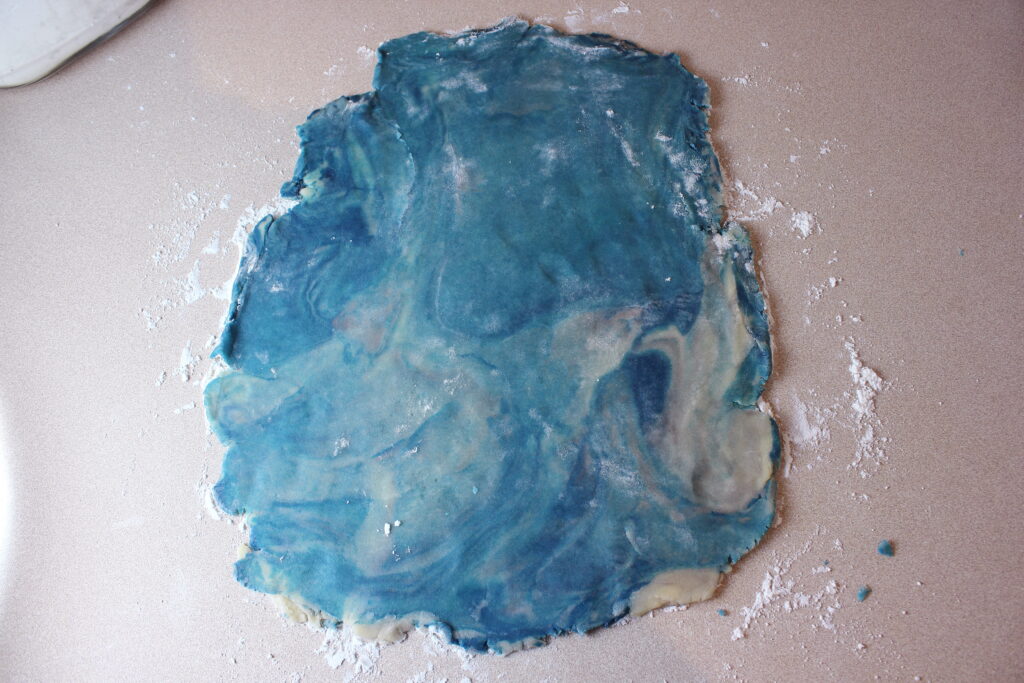 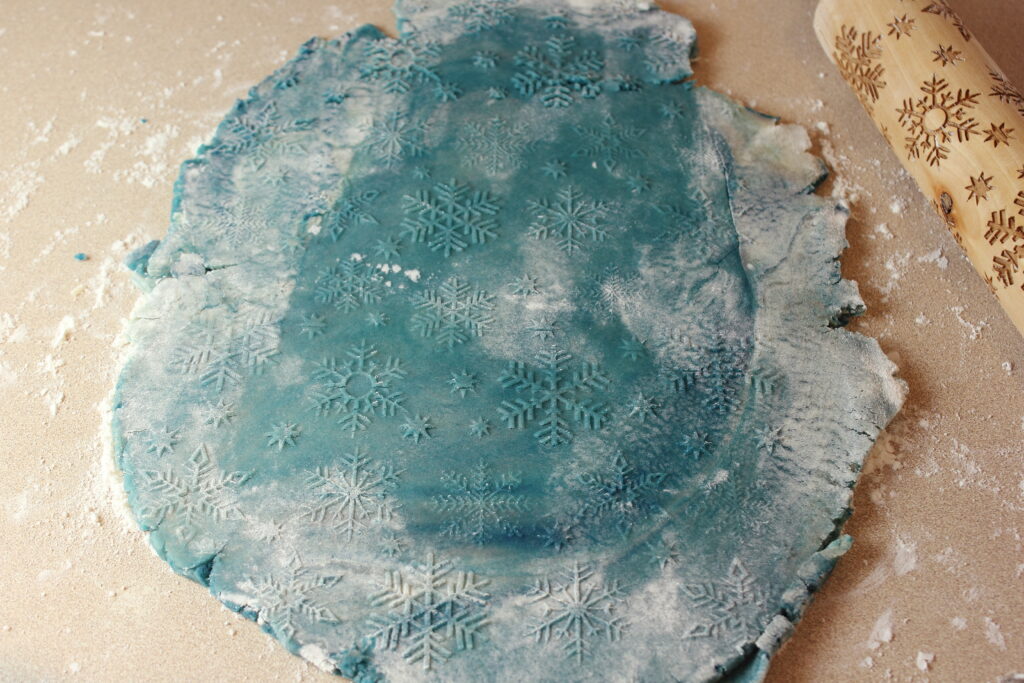 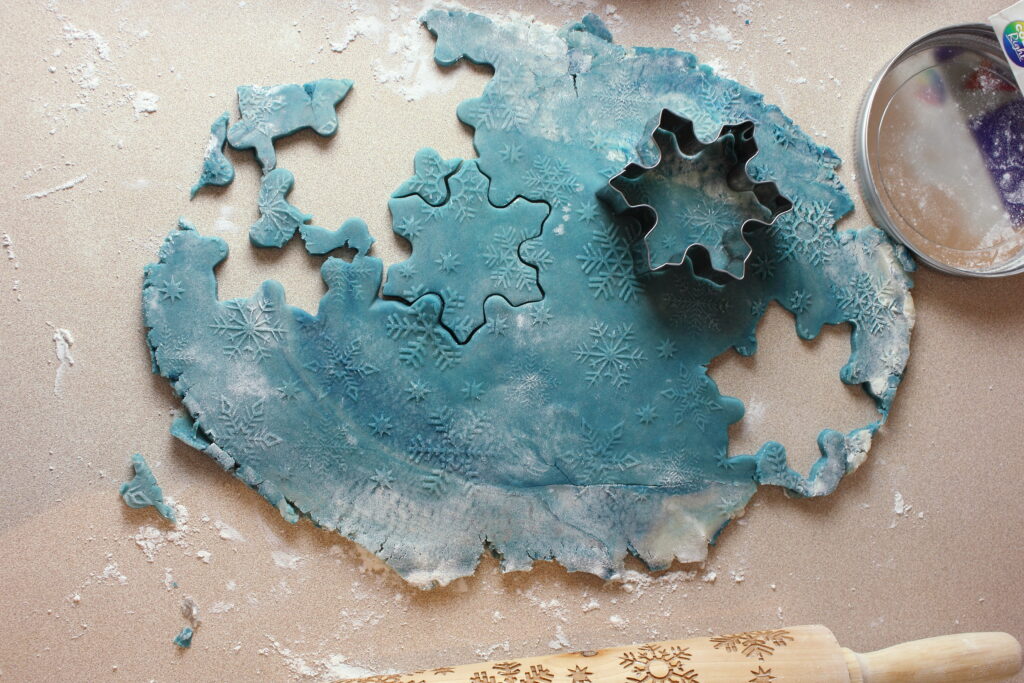 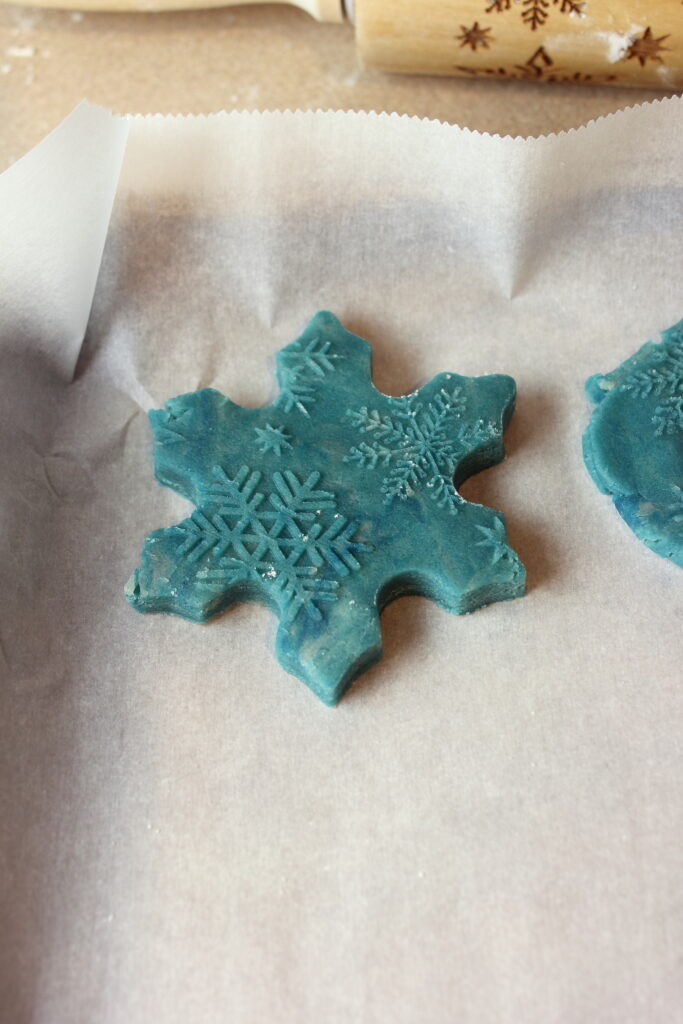 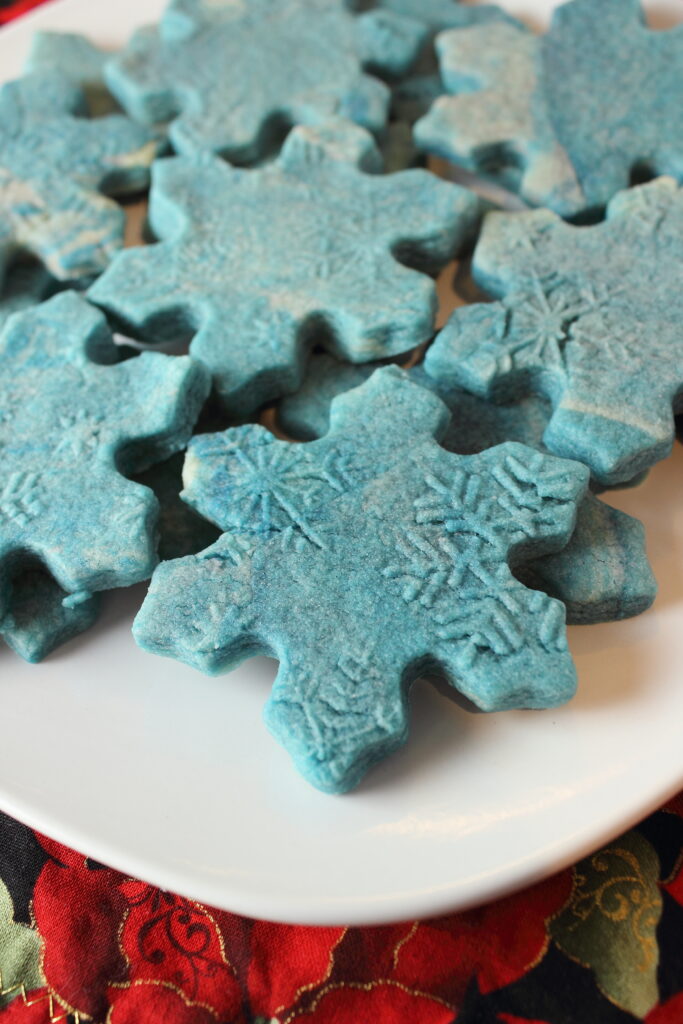 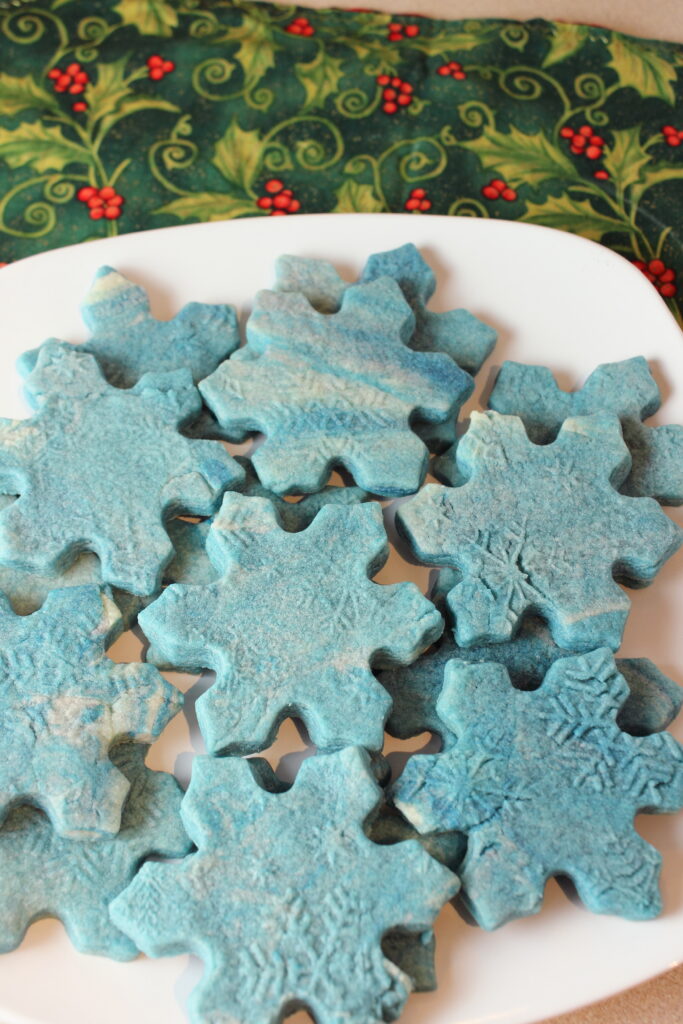 I had a vision of what I wanted these cookies to look like, and they turned out exactly like what I had in my mind, which, to be honest, doesn’t usually happen.  (Pinterest fails anyone?)  So I was super excited.  They look like glittery icy snow.

I used Wilton’s Color Mist, which I have been curious about for a while.  It’s like airbrushing your cookies without the expensive airbrushing equipment.  I used more of the silver than the blue for sure.  So make sure you have backups in case you run out.

1.  Roll the cookie dough out and cut into star shapes. Use the same process as above with the embossed rolling pin. 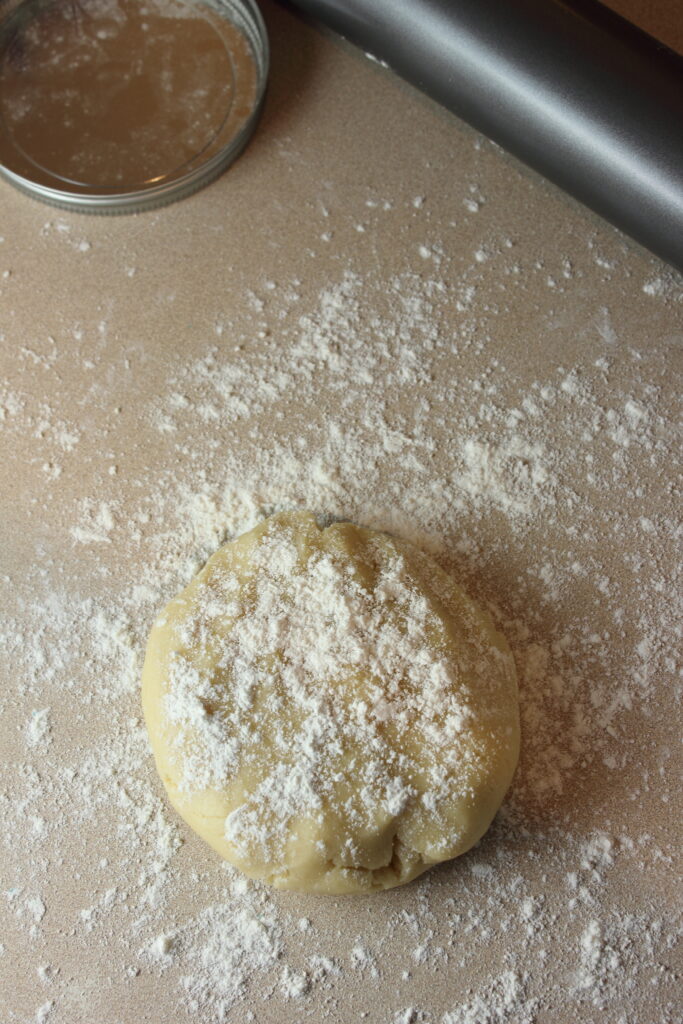 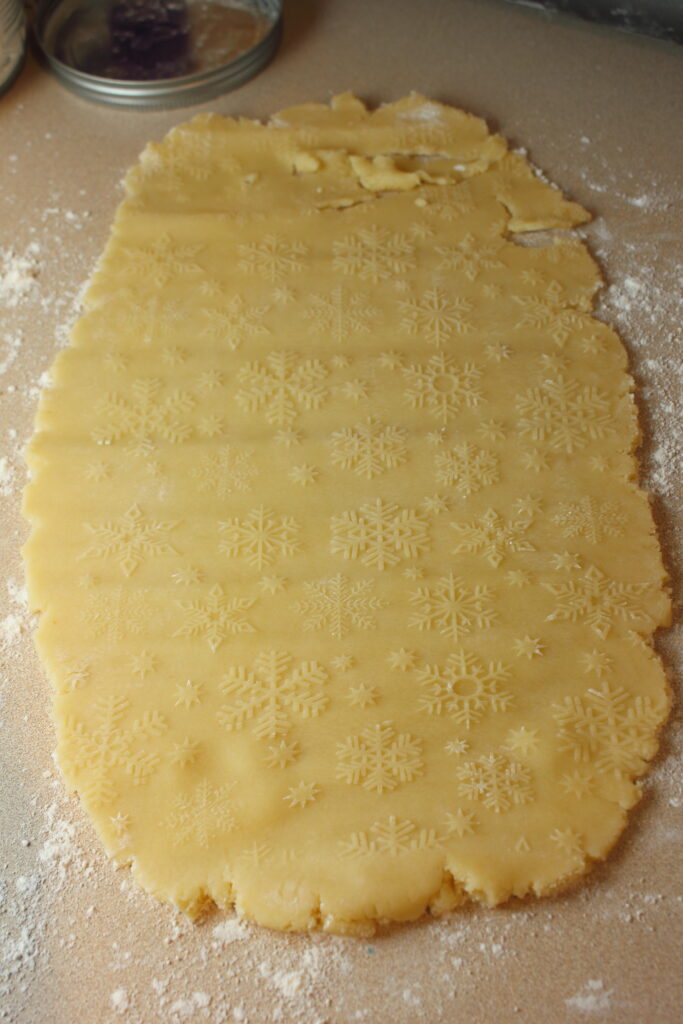 2.  Bake the cookies according to the directions on your recipe. 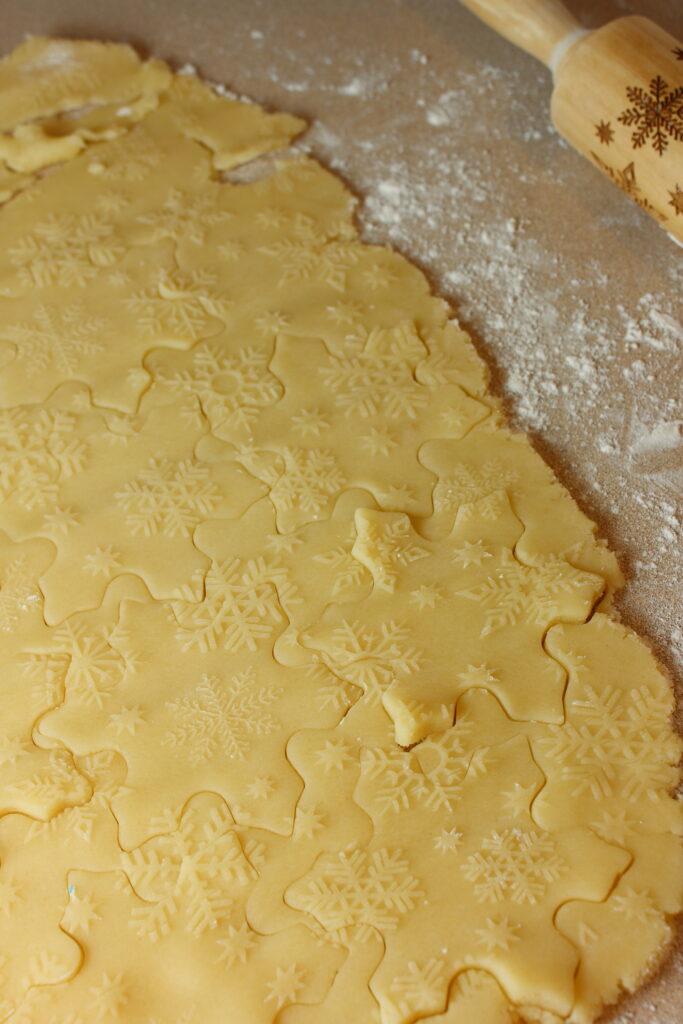 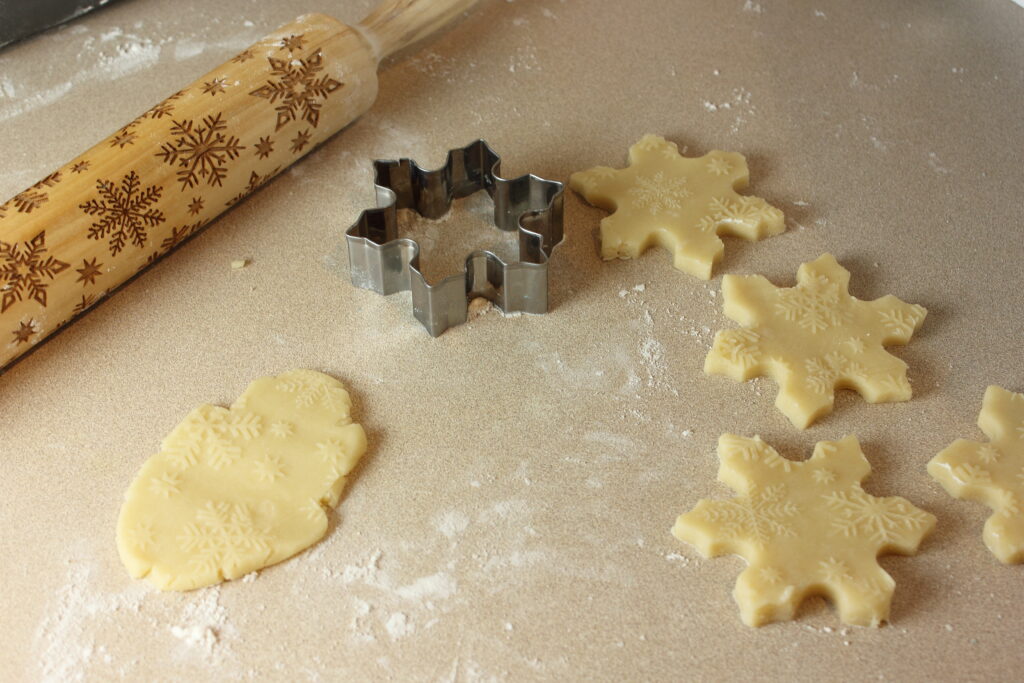 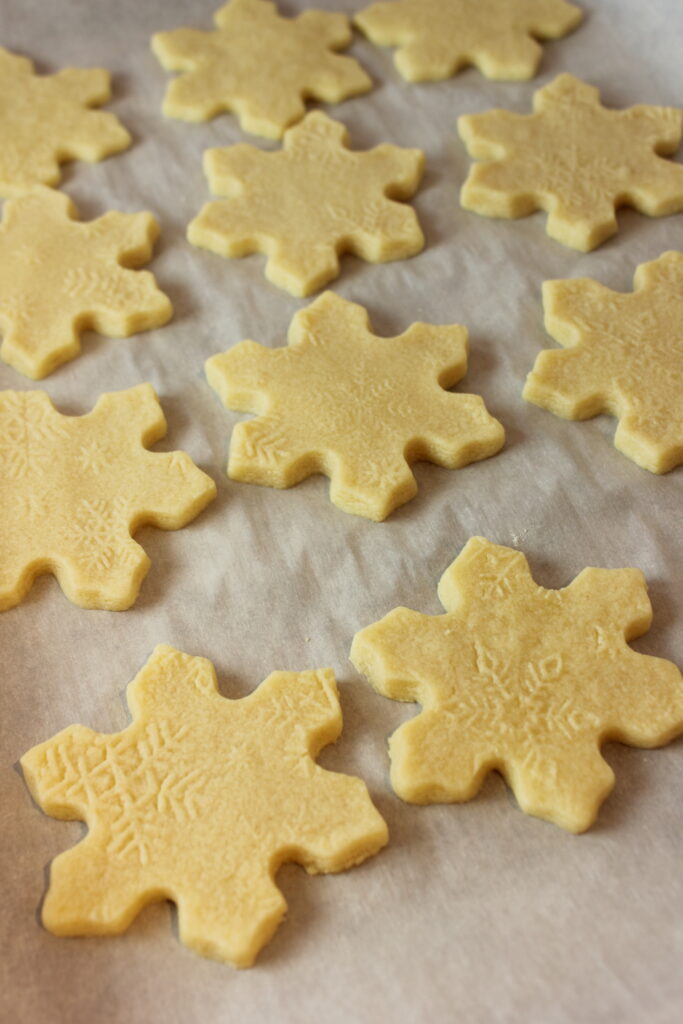 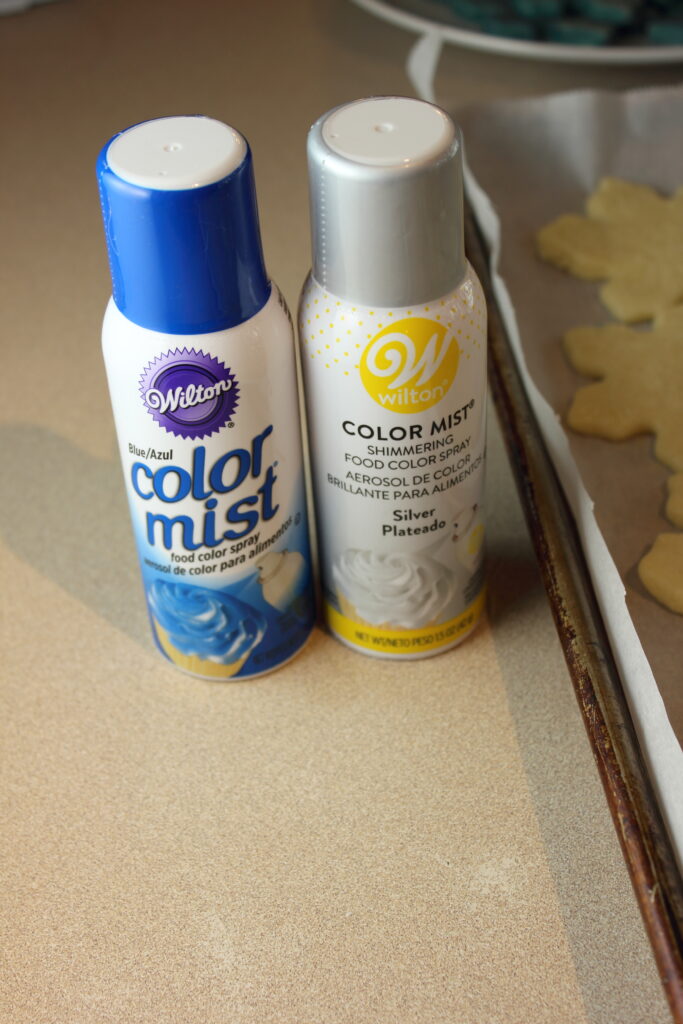 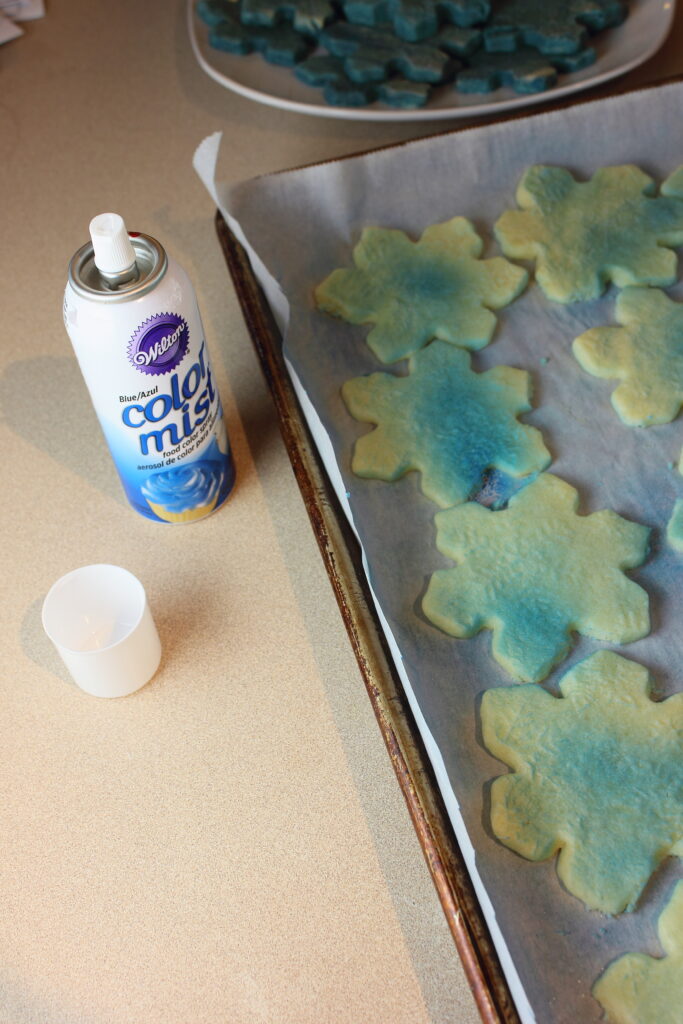 4.  Fill in the other areas with the silver spray. You can go back over spots you might have missed again if you want.  This gives them an “icy effect.” 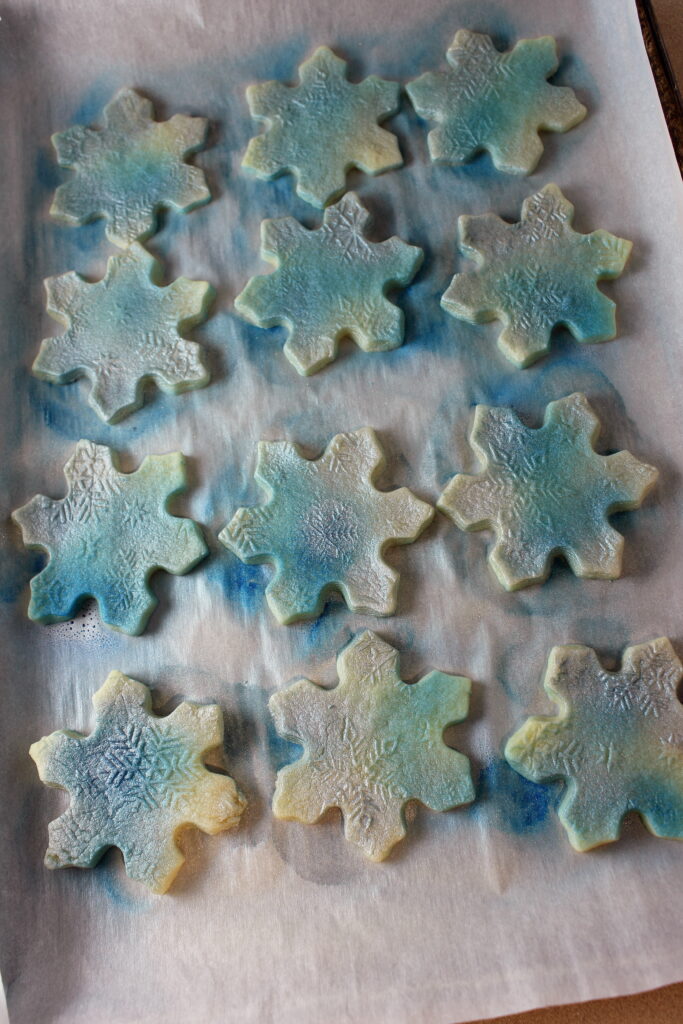 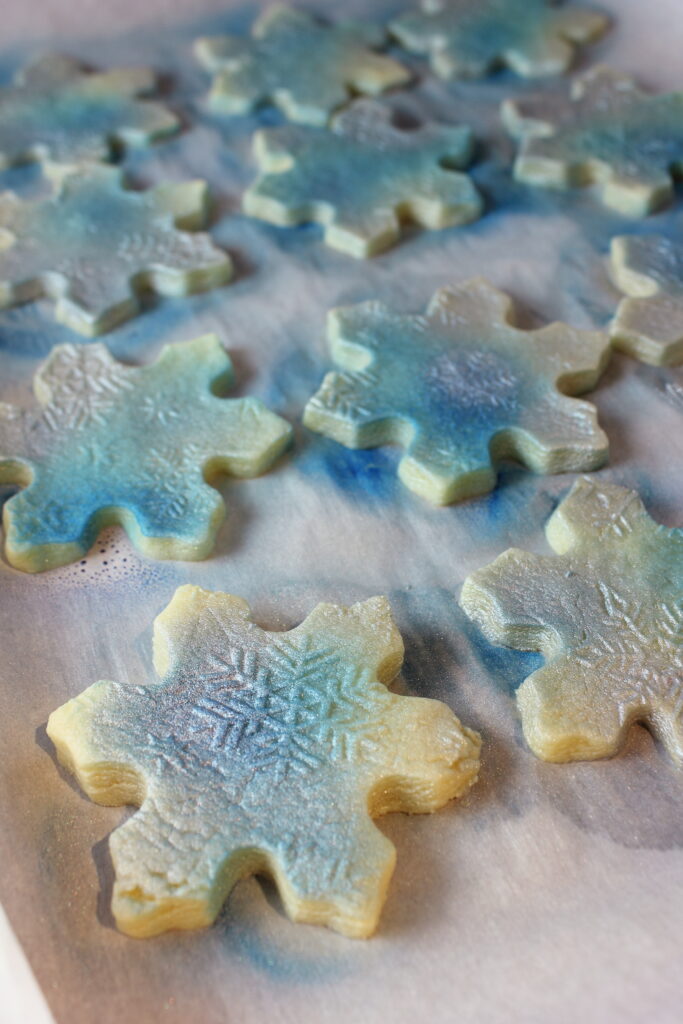 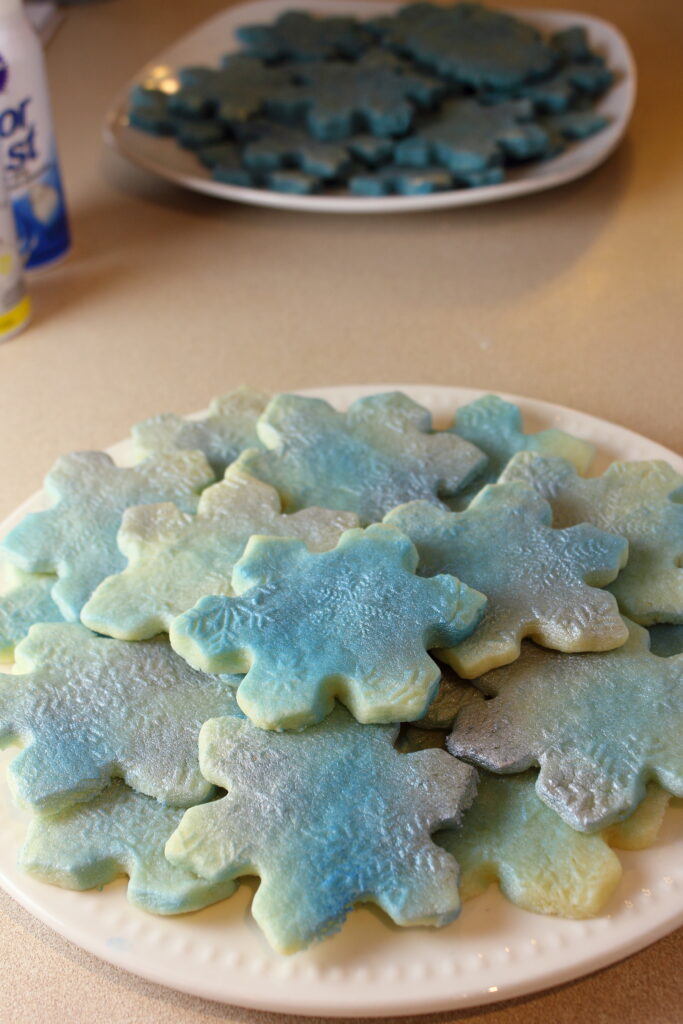 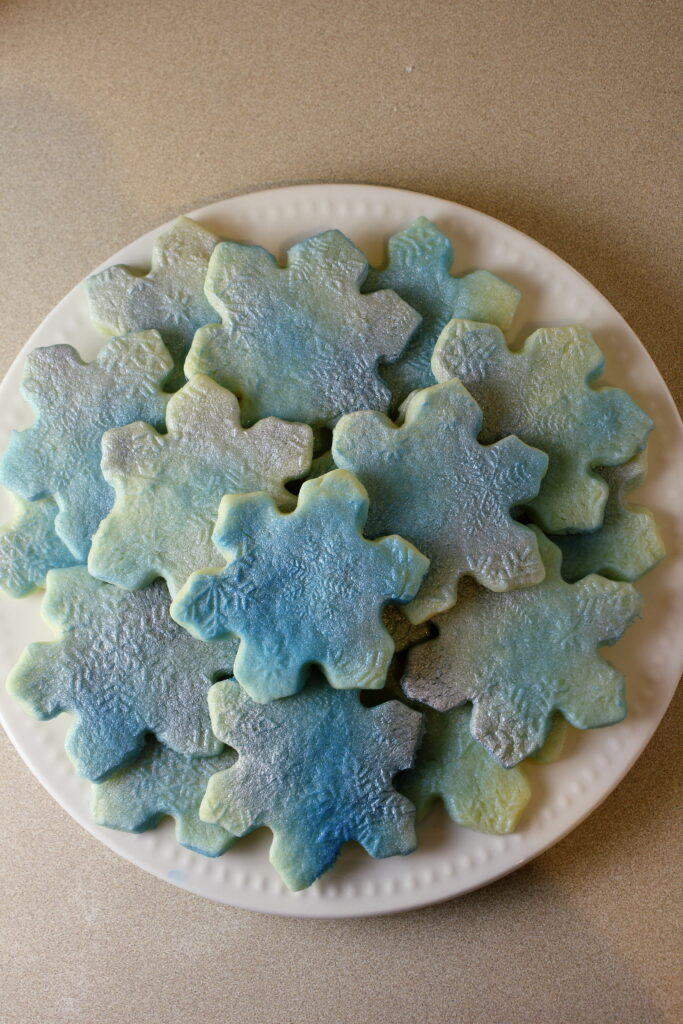 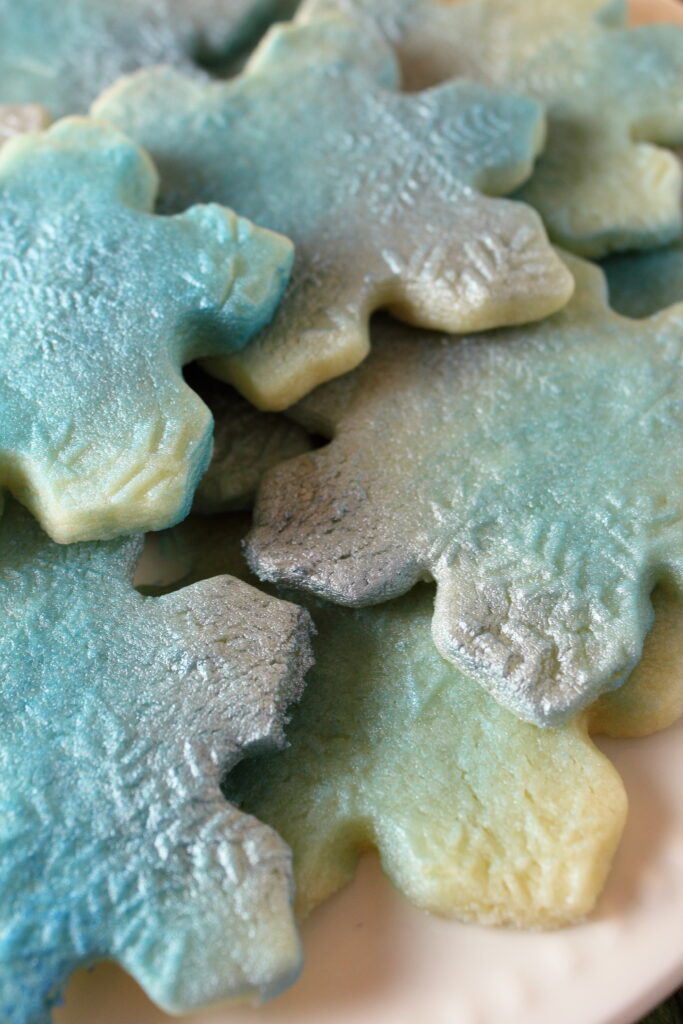 Join our exclusive membership community.  It’s free right now, but it won’t be for long, so lock in your price now.